Give us a call or email to order!

We accept cash, checks, and credit cards please let us know how you will be paying when the order is placed. 24-48 hour notice is recommended for availability of all menu items.

"We have had Custom Culinary Connections cater three events and have been enormously pleased with their service. Their food and presentation is superb. Equally important is the level of customer...

"Words can not truly express how happy we are with the food and professional service Custom Culinary Connections has provided for the many parties and events we've had over the...

"The delicious soups from Custom Culinary Connections are a perfect way to keep something yummy in the freezer for those times we don't feel like preparing a meal or didn't...

"I’ve been using Custom Culinary for my company’s catering needs for more than five years. Their staff are professional and courteous. They are very dependable and meet our needs over...

“Whether they are supporting the annual offsite attended by my Alexandria-based Executive Team with breakfast, lunch and dinner at Gauthier Vineyard for three days or serving 75 of our closest... 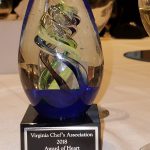 Jeffrey and Christy Aczel had a dream and then gained the courage to go for it! Early 2003 they started the process of starting their own business – one that will hopefully benefit many. They had two goals in mind – to spend more time as a family and to allow others to enjoy great food without all the hassles.

They obtained a special use permit for their property (zoned for agriculture) in Lanexa, VA and constructed a commercial kitchen on their property. The commute to work is literally a hop, skip and a jump away from their house.

Jeffrey and Christy Aczel are the owners and the chefs of Custom Culinary Connections and here’s a little about them.

Jeffrey Richard Aczel grew up in Danbury, CT in a family run Hungarian Restaurant, The Goulash Place. He was brought up to love food and entertaining customers. Ever since he was tall enough to see over the counter he enjoyed helping prepare and cook the food.

Jeffrey graduated from The Culinary Institute of America in 1992, worked at the Boca Raton Resort & Club in Boca Raton, FL, in Colonial Williamsburg at The Lodge and the Sportsman’s Grille. His latest position was with Old Dominion Clubs as the Executive Chef running Deer Run Grille, at Newport News Park, Blue Sky Cafe at the Newport News International Airport and Buckroe Beach Grille in Hampton.

Christy Lynn (Mistrik) Aczel grew up in Bridgewater, New Jersey. She also graduated from The Culinary Institute of America in 1992. She continued her education and graduated from Florida International University in Miami, FL in 1995 with a Bachelor’s degree in Hospitality Management. She worked in FL as a Sous Chef while attending FIU. 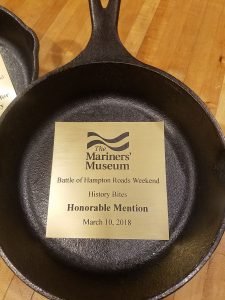 After moving to Williamsburg, Christy worked at Kingsmill Resort in the Bray Dining Room for three years and then in Conference Sales for three years.

Jeffrey and Christy were married in 1997 and have two children, Andrew and Isabelle. Christy & Jeffrey are very involved in their parish at St. Olaf Catholic Church in Norge. They are also members of the Greater Williamsburg Chamber & Tourism Alliance, Williamsburg Restaurant Association  and the American Culinary Federation.

All Together with Chef Nick, Chef Ricardo, Lisa our prep chef, Kandy our office Manager and all of our great service staff, we look forward to working with you in the upcoming year!